When customizing the look and feel of a Silverlight 2 control, people usually want to start with a copy of the control's default visuals. Unfortunately, getting at the default XAML for a control isn't always obvious or easy. A control's default XAML is stored in a specially named resource of the control's assembly and that resource (named generic.xaml) isn't particularly easy to get at by default. The good news is that the controls in the Silverlight 2 Beta 1 SDK/Tools are documented on MSDN and that documentation includes the default styles.

But sometimes I prefer something a little "closer to the metal", so I wrote a small WPF 3.5 application to improve this experience for developers and designers working with Silverlight 2 controls. SilverlightDefaultStyleBrowser is a simple application that automatically extracts the default styles from an assembly's generic.xaml, lists the available control styles, and presents them in an easy-to-browse manner with syntax highlighting, automatic formatting, and expandable/collapsible nodes. The common scenario of copying a Style or Template is made easy by two dedicated buttons that do just that! 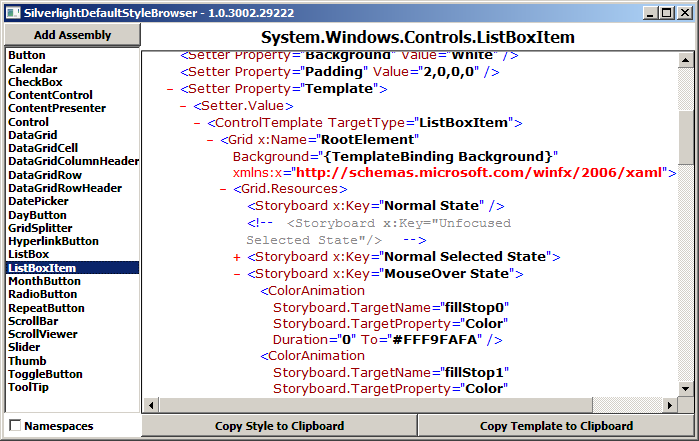 [Click here or on the image above to download a ZIP of the SilverlightDefaultStyleBrowser tool - and its complete WPF 3.5 source code.]

Using SilverlightDefaultStyleBrowser is deliberately simple. When the application loads, it automatically looks in the Silverlight SDK default install directory, parses all the assemblies it finds there, and adds the relevant styles to its list (as seen in the image above). Adding additional assemblies is as easy as hitting the "Add Assembly" button, selecting the assemblies, and hitting OK. Once the styles are loaded, simply select the control of interest to browse its default XAML. The "Copy Style to Clipboard" button copies the XAML for the entire style to the clipboard. The "Copy Template to Clipboard" button copies just the template XAML from within the Style (probably the more common scenario). Paste the copied XAML directly into your Silverlight application, tweak it or customize it, and you're set - it's that easy!

Silverlight and WPF are all about allowing developers and designers to easily customize the look and feel of their applications. I hope SilverlightDefaultStyleBrowser helps make that process even easier for both groups!