"If you can't measure it, you can't manage it." [A brief analysis of markdownlint rule popularity]

From time to time, discussions of a markdownlint rule come up where the popularity of one of the rules is questioned. There are about 45 rules right now, so there's a lot of room for debate about whether a particular one goes too far or isn't generally applicable. By convention, all rules are enabled for linting by default, though it is easy to disable any rules that you disagree with or that don't fit with a project's approach. But until recently, I had no good way of knowing what the popularity of these rules was in practice.

If only there were an easy way to collect the configuration files for the most popular repositories in GitHub, I could do some basic analysis to get an idea what rules were used or ignored in practice. Well, that's where Google's BigQuery comes in - specifically its database of public GitHub repositories that is available for anyone to query. I developed a basic understanding of the database and came up with the following query to list the most popular repositories with a markdownlint configuration file:

Aside: While this resource was almost exactly what I needed, it turns out the data that's available is off by an order of magnitude, so this analysis is not perfect. However, it's an approximation anyway, so this should not be a problem. (For context, follow this Twitter thread with @JustinBeckwith.)

The query above returns about 60 repository names. The next step was to download and process the relevant configuration files and output a simple CSV file recording which repositories used which rules (based on configuration defaults, customizations, and deprecations). This was fairly easily accomplished with a bit of code I've published in the markdownlint-analyze-config repository. You can run it if you'd like, but I captured the output as of early October, 2020 in the file analyze-config.csv for convenience.

Importing that data into the Numbers app and doing some simple aggregation produced the following representation of how common each rule is across the data set: 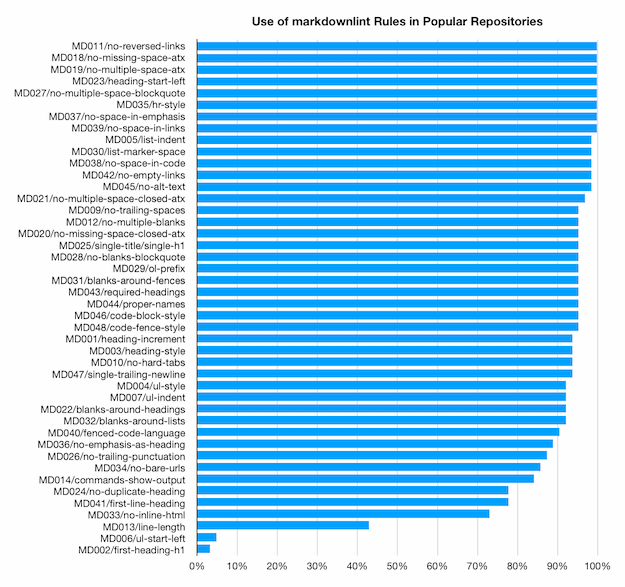 Overall, this was a very informative exercise. The data source isn't perfect, but it's a good start and I can always rerun the numbers if I get a better list of repositories. Rules seem to be disabled less often in practice than I would have guessed. This is nice to see - and a good reminder to be careful about introducing controversial rules that many people end up wanting to turn off. The next time a discussion about rule popularity comes up, I'll be sure to reference this post!

If one is good, two must be better [markdownlint-cli2 is a new kind of command-line interface for markdownlint]

About 5 years ago, Igor Shubovych and I discussed the idea of writing a CLI for markdownlint. I wasn't ready at the time, so Igor created markdownlint-cli and it has been a tremendous help for the popularity of the library. I didn't do much with it at first, but for the past 3+ years I have been the primary contributor to the project. This CLI is the primary way that many users interact with the markdownlint library, so I think it is important to maintain it.

However, I've always felt a little bit like a guest in someone else's home and while I have added new features, there were always some things I wasn't comfortable changing. A few months ago, I decided to address this by creating my own CLI - and approaching the problem from a slightly different/unusual perspective so as not to duplicate the fine work that had already been done. My implementation is named markdownlint-cli2 and you can find it here:

markdownlint-cli2 has a few principles that motivate its interface and behavior:

So, which CLI should you use? Well, whichever you want! If you're happy with markdownlint-cli, there's no need to change. If you're looking for a bit more flexibility or want to see if markdownlint-cli2 is faster in your scenario, give it a try. At this point, markdownlint-cli2 supports pretty much everything markdownlint-cli does, so you're free to experiment and shouldn't need to give up any features if you switch.

What does this mean for the future of the original markdownlint-cli? Nothing! It's a great tool and it's used by many projects. I will continue to update it as I release new versions of the markdownlint library. However, I expect that my own time working on new features will be focused on markdownlint-cli2 for now.