TextAnalysisTool.NET to Windows 8: "Y U no run me under .NET 4?" [How to avoid the "please install .NET 3.5" dialog when running older .NET applications on the Windows 8 Developer Preview]

I wrote TextAnalysisTool.NET a number of years ago to streamline the task of analyzing large log files by creating an interactive experience that combines searching, filtering, and tagging and allow the user to quickly identify interesting portions of a large log file. Although .NET 2.0 was out at the time, I targeted .NET 1.1 because it was more widely available, coming pre-installed on Windows Server 2003 (the "latest and greatest" OS then). In the years since, I've heard from folks around the world running TextAnalysisTool.NET on subsequent Windows operating systems and .NET Framework versions. Because Windows and the .NET Framework do a great job maintaining backwards compatibility, the same TextAnalysisTool.NET binary has continued to work as-is for the near-decade since its initial release.

But the story changes with Windows 8! Although Windows 8 has the new .NET 4.5 pre-installed (including .NET 4.0 upon which it's based), it does not include .NET 3.5 (and therefore .NET 2.0). While I can imagine some very sensible reasons for the Windows team to take this approach, it's inconvenient for existing applications because .NET 4 in this scenario does not automatically run applications targeting an earlier framework version. What is cool is that the public Windows 8 Developer Preview detects when an older .NET application is run and automatically prompts the user to install .NET 3.5: 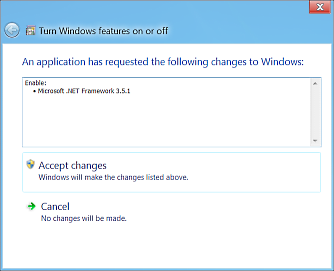 That's pretty slick and is a really nice way to bridge the gap. However, it's still kind of annoying for users as it may not always be practical for them to perform a multi-megabyte download the first time they try to run an older .NET program. So it would be nice if there were an easy way for older .NET applications to opt into running under the .NET 4 framework that's already present on Windows 8...

And there is! :) One aspect of .NET's "side-by-side" support involves using .config files to specify which .NET versions an application is known to work with. (For more information, please refer to the MSDN article How to: Use an Application Configuration File to Target a .NET Framework Version.) Consequently, improving the Windows 8 experience for TextAnalisisTool.NET should be as easy as creating a suitable TextAnalysisTool.NET.exe.config file in the same folder as TextAnalysisTool.NET.exe.

Specifically, the following should do the trick:

Aside: Although this trick will work in many cases, it isn't guaranteed to work. In particular, if there has been a breaking change in .NET 4, then attempting to run a pre-.NET 4 application in this manner might fail. Therefore, it's prudent to do some verification when trying a change like this!

[Click here to download a ZIP file containing TextAnalysisTool.NET, the relevant .config file, its documentation, and a ReadMe.]

TextAnalysisTool.NET has proven to be extremely popular with support engineers and it's always nice to hear from new users. I hope today's post extends the usefulness of TextAnalysisTool.NET by making the Windows 8 experience as seamless as people have come to expect!

Make it your own [WebMatrix's new extensibility support enables developers and applications to customize the web development experience to their liking!]

In conjunction with Microsoft's ongoing BUILD Windows conference, we have just released betas of the next version of the Microsoft Web Platform. Today's releases include a lot of new functionality and I encourage interested parties to have a look at what's new in ASP.NET and WebMatrix.

In this post, I'm going to focus on one aspect of the WebMatrix 2 Beta: extensibility. By exposing a public API and opening up the application to others, WebMatrix enables individuals and community members to customize the experience to best fit their own unique processes and workflow. Many aspects of the development experience are configurable, so users can become more productive by streamlining common tasks, automating monotonous ones, and simplifying difficult ones! 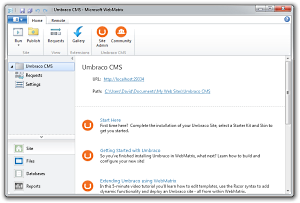 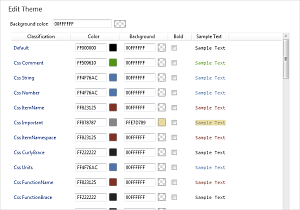 Opening WebMatrix's extension gallery (by clicking the "Extensions/Gallery" Ribbon button from the Site workspace) shows some of the extensions that have been created to help give an idea what's possible. I'll call out three of them: 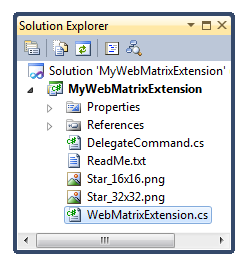 The project template sets up the right infrastructure, all the necessary references, includes pre- and post-build rules to make development a little easier, and helps get you started with a simple Ribbon-based extension that demonstrates some of the basic extensibility points. The template's ReadMe.txt explains how to configure Visual Studio so that pressing F5 will automatically load the extension inside WebMatrix for a simple, seamless debugging experience with complete breakpoint support, etc.. FYI that I'd like to improve this template by adding support for NuGet package generation (so it will be easier to deploy extensions to a gallery) and maybe also create a VISX wrapper for it (to enable more seamless install of the template itself).

Aside: While the project template "helpfully" copies your extension to the right place for WebMatrix to load it on startup, the extension is not properly installed and so WebMatrix doesn't know how to uninstall it. For now, the easiest way to get rid of a custom extension is to close WebMatrix and delete the contents of the "%USERPROFILE%\AppData\Local\Microsoft\WebMatrix\Components" directory.

The new extensibility APIs in the WebMatrix 2 Beta allow developers to get started with extensions today. And while there aren't yet extension points for everything, there are enough to enable some pretty interesting scenarios. Available extension points include: 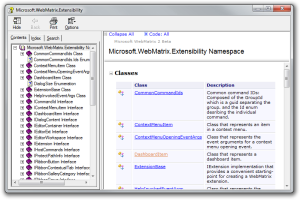 That said, people are going to have a lot of great extension ideas that are either difficult or impossible to achieve with the Beta APIs. Not being able to put good ideas into practice is certainly disappointing, but it's also a great opportunity to let us know what features are missing from the API and how we can improve it! To make that easy, there's a WebMatrix forum where you can ask questions and exchange ideas. Once you've tried things out, please go there and share your thoughts!

Aside: It probably goes without saying (but I'll say it anyway!) that the APIs available in the WebMatrix 2 Beta are subject to change and it's likely that extensions written for Beta will need to be modified in order to run on later releases. That's not to discourage people from writing extensions, but rather an attempt to set expectations appropriately. :)

Further aside: It's natural to wonder if existing plugins for Visual Studio will "just work" in WebMatrix. The answer is that they will not - but in most cases it turns out that trying to load a Visual Studio extension inside WebMatrix wouldn't be all that meaningful anyway... At this point, the functionality of these two products and the target audience (both users and developers) are different enough that things don't align in a way that makes this scenario work.

Know your place in life [Free PlaceImage control makes it easy to add placeholder images to any WPF, Silverlight, or Windows Phone application!]

One of the challenges with referencing online content is that you never know just how long it will take to download... On a good day, images show up immediately and your application has exactly the experience you want. On a bad day, images take a looong time to load - or never load at all! - and your application's interface is full of blank spaces. Applications that make use of remote images need to be prepared for variability like this and should have "placeholder" content to display when the desired image isn't available.

Of course, there are a variety of ways to deal with this; I thought it would be neat to create a reusable, self-contained class and share it here. I envisioned a simple control that "looked" like a standard Image element (i.e., had the same API), but that seamlessly handled the work of displaying placeholder content before an image loaded and getting rid of it afterward. Naturally, I also wanted code that would run on WPF, Silverlight, and Windows Phone!

The result of this exercise is something I've called PlaceImage. PlaceImage has the same API as the framework's Image and can be dropped in pretty much anywhere an Image is used. To enable the "placeholder" effect, simply set the PlaceholderSource property to a suitable image. (Aside: While you could specify another remote image for the placeholder, the most sensible thing to do is to reference an image that's bundled with the application (e.g., as content or a resource).) PlaceImage immediately shows your placeholder image and waits for the desired image to load - at which point, PlaceImage swaps it in and gets rid of the placeholder!

I've written a sample application for each of the supported platforms that displays contact cards of imaginary employees. When the sample first runs, none of the remote images have loaded, so each card shows the "?" placeholder image: 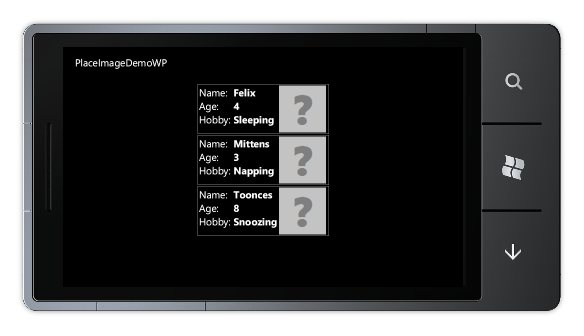 After a while, some of the remote images will have loaded: 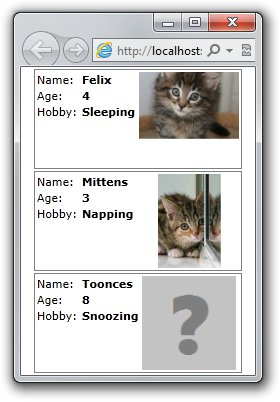 Eventually, all the remote images load: 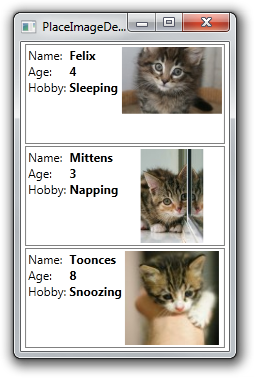 Thanks to placekitten for the handy placeholder images!

Making use of online content in an application is easy to do and a great way to enrich an application. However, the unpredictable nature of the network means content might not always be available when it's needed. PlaceImage makes it easy to add placeholder images to common scenarios and helps keep the user interface free of blank spaces. With easy support for WPF, Silverlight, and Windows Phone, you can add it to pretty much any XAML-based application!

[Click here to download the PlaceImageDemo project which includes PlaceImage.cs and sample applications for WPF, Silverlight, and Windows Phone.]