Since getting involved with Silverlight and finding out the XPS document type WPF enables has XAML at its core, I've been wondering how Silverlight would do as a lightweight XPS viewer.

First, a bit of background: WPF is the Windows Presentation Foundation and represents a new approach to UI for Windows. XPS refers to the XML Paper Specification, a device-independent file format for flexible document representation (think PDF) that's part of Office 2007 and .NET 3.0. WPF offers rich support for displaying XPS documents via its DocumentViewer and XpsDocument classes (among others). Because the 1.1 Alpha release doesn't currently include the relevant classes, Silverlight wouldn't appear to be well suited for XPS document display at first glance...

However, Silverlight does have the Downloader class which includes support for packages (for the purposes of this discussion, packages are basically just ZIP archives). Since an XPS document is really just a package, and the core document format XPS uses is XAML, and Silverlight speaks XAML (well, at least a subset of it!), maybe it's not such a stretch to do XPS with Silverlight after all.

I thought it would be a neat exercise to try to write an XPS viewer with the publically available Silverlight 1.1 Alpha bits so I gave it a try and ended up with an application I call SimpleSilverlightXpsViewer: 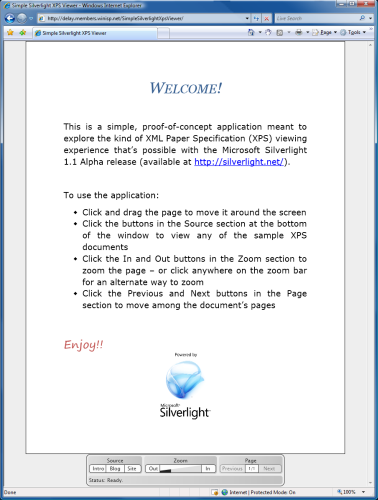 Go ahead and click here (or on the image above) to play around with the application in your browser. If you find yourself wondering how it works, just click here to download the complete source code/resources and play around with it yourself! (To build the SimpleSilverlightXpsViewer project, you'll want to use Orcas Beta 1 and the Silverlight Tools.)

Of course, this is just a proof-of-concept application built on an Alpha platform, so there are some rough edges. :) Some notes are in order:

The web just got even better... [Silverlight announced at MIX07!]

During his keynote at the MIX07 conference in Las Vegas, Scott Guthrie showed off some of the power of Microsoft's recently announced Silverlight platform. In particular, the ability to easily run managed code in the web browser - coupled with a powerful rendering engine - seems like it will to radically change the landscape of the web. My team had the privilege of writing the Silverlight Airlines demonstration he used to show off just how easy it is to develop with Silverlight. Demoed on stage, it looked something like the following image: 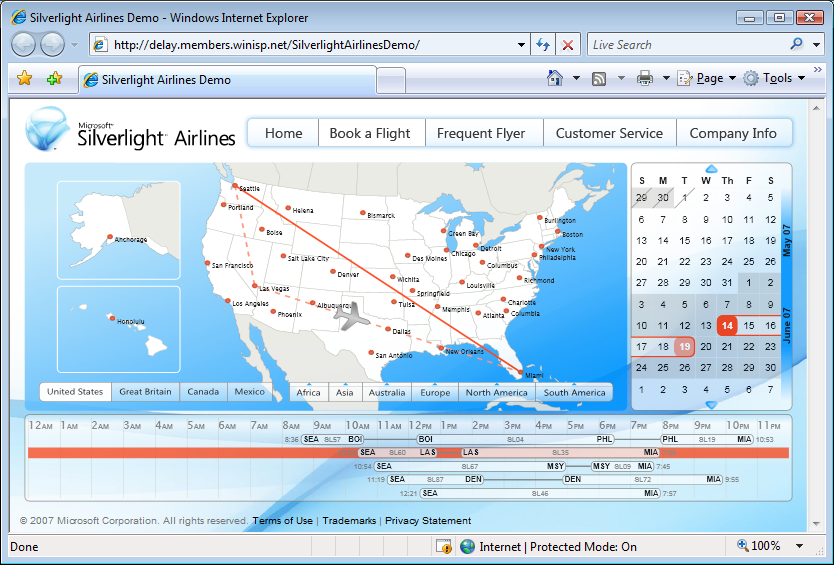 Now that your appetite is whetted, go ahead and click here (or on the image above) to view the demo in your browser with the Silverlight 1.1 Alpha thanks to the seamless cross-browser, cross-platform support that Silverlight provides.

When our manager Shawn Burke asked us to put this demo together, my coworker Ted Glaza and I had practically no experience with Silverlight or WPF. So we spent about a week playing around with the technology to learn how it worked. By that time, the general concept of the demo was fairly well established and we spent time the next week developing the foundations of the application. Before long, we had a working demo that we showed off to Scott. The third week was spent incorporating visual feedback from a designer and adding some finishing touches. For those of you keeping track at home, that's one cool app written by two developers in just three weeks - beginning with nothing and building on top of a platform that was still being developed - pretty compelling, I think!

In the spirit of openness and learning, you can click here to download the complete source code for this demo application and play around with it yourself!

A few notes on the application:

The Silverlight Airlines demo was a fun project to work on - I look forward to be seeing (and doing!) a lot more with Silverlight in the coming days!

PS - Since the keynote presentation, there has been some interest in reusing the calendar control. Beyond making the source code available here, I may write a follow-up blog post going into more detail about the calendar itself. As a quick teaser: it's capable of more sophisticated display than what's in the demo application. :)

PPS - If you watched the Scott Guthrie keynote, you probably saw that there was a time Scott tried to switch the display screen over to the Mac to demonstrate something and it took a while for the conference's A/V folks to actually make the switch. A couple of people have asked if this delay was due to a problem with the Mac or Silverlight. I happen to have been sitting backstage mere inches away from the Mac in question (conferences use KVM switches to keep all the demo machines backstage) and I can assure you that there was no technical issue with the Mac or Silverlight. Aside from the conference tech taking a little while to switch the display over, there were no technical glitches during the demo. :)