"Your feedback is important to us; please stay on the line..." [Improving Windows Phone 7 application performance is even easier with these LowProfileImageLoader and DeferredLoadListBox updates]

A few months ago I began a similar post about LowProfileImageLoader/DeferredLoadListBox updates by saying:

Windows Phone 7 applications run on hardware that's considerably less powerful than what drives typical desktop and laptop machines. Therefore, tuning phone applications for optimum performance is an important task - and a challenging one! To help other developers, I previously coded and blogged about two classes: LowProfileImageLoader (pushes much of the cost of loading images off the UI thread) and DeferredLoadListBox (improves the scrolling experience for long lists). These two classes can be used individually or together and have become a regular part of the recommendations for developers experiencing performance issues.

In the time since, I've continued to hear from people who are benefitting from LowProfileImageLoader and DeferredLoadListBox - and the code has even been incorporated into the WP7Contrib project! Along the way, I've also collected some great feedback, so I recently dedicated time to make a few improvements: 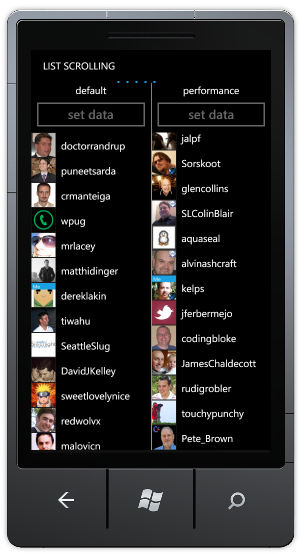 [Click here to visit the NuGet gallery page for a package containing the PhonePerformance assembly.]

Windows Phone 7 developers must pay attention to performance because otherwise it's easy to end up with a slow, badly-behaved application. The PhonePerformance assembly focuses on two common scenarios (image loading and list scrolling) and attempts to improve upon the default experience by making it easy to avoid known problem areas. As with any performance technique, results can vary greatly depending on the specifics of each scenario, so it's important to take measurements and test everything on real phone hardware.

Many developers have told me they had success with the PhonePerformance assembly - I hope you do, too!