Lately I've seen a few people wanting to display rich text in a Silverlight application, but having no way to do so easily. Most recently, I saw Tim Heuer bump into this when displaying RSS content in a neat demo of his. The basic problem is that Silverlight's primary text display object, TextBlock, does not natively have a way to display HTML - and that's the format most rich text is in these days. It seemed that if only there were a TextBlock that took HTML as input and built up a collection of Run and LineBreak objects corresponding to that HTML, things would be easier...

So I wrote HtmlTextBlock, a "plug-compatible" replacement for TextBlock that knows how to take simple HTML (technically XHTML, see the notes below) and display it in a manner that fairly closely approximates how a web browser does. A picture is worth a thousand words, so here's what HtmlTextBlock looks like in action: 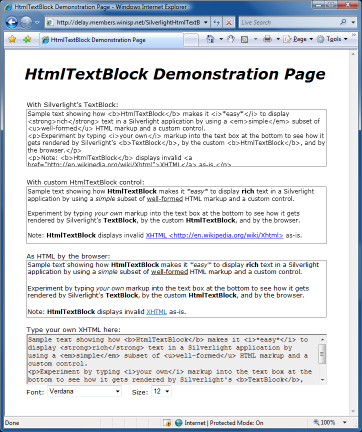 You can click here (or on the image above) to experiment with HtmlTextBlock in your own browser in an interactive demo page. As usual, I've made the complete source code available, so click here to download the source code and play around with it yourself! (To build the project, you'll want to use Visual Studio 2008 Beta 2 and the latest Silverlight Tools.)

HtmlTextBlock is obviously nothing like a complete HTML rendering engine [that's what web browsers are for! :) ]. However, if you want to add simple support for rich text to your Silverlight application without a lot of work, HtmlTextBlock may be just the thing for you!