Microsoft released a bunch of new functionality for its web platform earlier today - and all of them are free! The goodies include new tools like WebMatrix, ASP.NET MVC3 and the Razor syntax, and IIS Express - as well updates to existing tools like the Web Platform Installer and Web Deploy. These updates work together to enable a variety of new scenarios for the web development community while simultaneously making development simpler and more powerful. I encourage everyone to check it out!

One of the things I find particularly appealing is the idea of "web helpers": chunks of code that can be easily added to a project to make common tasks easier - or enable new ones! Helpers can do all kinds of things, including integrating with bit.ly, Facebook, PayPal, Twitter, and so-on. For an example of cool they are, here's how easy it is to add an interactive Twitter profile section to any ASP.NET web page [and it's even easier if you don't customize the colors :) ]: 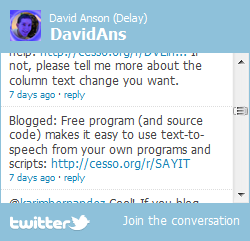 You can see other examples of useful web helpers (including charting, cryptography, Xbox gamer cards, ReCaptcha, and more) in the ASP.NET social networking tutorial.

Aside: While web helper assemblies like System.Web.Helpers and Microsoft.Web.Helpers are obviously easy to use from ASP.NET Razor and ASP.NET MVC, what's neat (and not immediately obvious) is that they don't need to be tied to those technologies. At the end of the day, helper assemblies are normal .NET assemblies and some of their functionality can be used equally well in non-web scenarios!

One of the web helpers that caught my eye when I was looking around is the Windows Azure Storage Helper which makes it easy to incorporate Windows Azure blob and table access into ASP.NET applications. If you happened to be reading this blog a few months ago, you might remember that I already have some experience working with Windows Azure and Amazon S3 blobs in the form of my BlobStore Silverlight application and BlobStoreOnWindowsPhone Windows Phone 7 sample.

When I wrote BlobStore for Silverlight, I didn't see any pre-existing libraries I could make use of (the Windows Azure Managed Library didn't (and maybe still doesn't?) work on Silverlight and there were some licensing concerns with the S3 libraries I came across), so I implemented my own support for what I needed: list/get/set/delete support for blobs on Windows Azure and Amazon Simple Storage Service (S3). But now that we're talking about ASP.NET, web helpers run on the server and the Windows Azure Storage Helper is able to leverage the Windows Azure Managed Library for all the heavy lifting so it can expose things in a clean, web helper-suitable way (via the WindowsAzureStorage static class and its associated methods).

That's good stuff and the WindowsAzureStorage helper seems quite comprehensive - but what about customers who are already using Amazon S3 and can't (or won't) switch to Windows Azure? Well, that's where I come in. :) I'd thought it would be neat to create my own web helper assembly, and this seemed like the perfect opportunity - so I've created the Delay.Web.Helpers web helper assembly by leveraging the work I'd already done for BlobStore. This enables basic list/get/set/delete functionality for S3 blobs without a much additional effort and seems like a great way to help out more customers!

Most people don't like having many different ways to do the same thing, so I decided early on that the fundamental API for AmazonS3Storage would be the same as that already exposed by WindowsAzureStorage. That led directly to the following API (the two "secret key" properties have been renamed to match Amazon's terminology, but they're used exactly the same):

And because I wanted to be sure AmazonS3Storage could really be dropped into an application that already used WindowsAzureStorage, I did exactly that: I downloaded the WindowsAzureStorage sample application, performed a find-and-replace on the class name, updated the names of the two "secret key" properties, removed some unsupported functionality, and then verified that the sample ran and worked correctly. (It did!)

While I think the WindowsAzureStorage APIs works well for listing and reading existing blobs, it's not immediately clear what a blobAddress string is made up of or how to create one, so I might get a little confused in scenarios that create blobs from scratch... It so happens that the blobAddress structure is ContainerName/BlobName (which I preserve in AmazonS3Storage), but that feels like an implementation detail developers focusing on the upload scenario shouldn't need to know. Therefore, I've also exposed the following set of methods with separate bucketName and blobName parameters (and otherwise the same signatures):

I'm optimistic this provides a somewhat easier model for developers to work with, but I encourage folks to use whatever they think is best! :)

Aside: I hadn't previously needed create/list/delete functionality for buckets, so the corresponding methods are not part of today's release. However, I expect them to be rather easy to add and will likely do so at a future date.

To try to ensure I hadn't made any really dumb mistakes, I wrote a complete automated test suite for the new AmazonS3Storage class. With the exception of verifying each ArgumentNullException for null parameters, the test suite achieves complete coverage of the new code and runs as a standard Visual Studio test project (i.e., here's an example of using web helpers "off the web").

As much fun as testing is, a sample is often the best way to demonstrate how an API is used in practice - so I also put together a (very) quick Razor-based web site to provide simple list/get/set/delete access to an arbitrary Amazon S3 account/bucket: 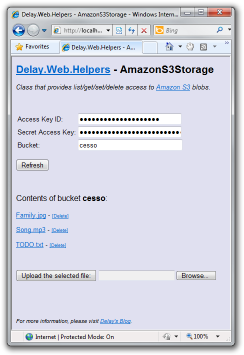 Using the Delay.Web.Helpers web helper is as easy as you'd expect; here's the piece of code that lists the bucket's contents (which is only as long as it is because it handles invalid credentials and empty buckets):

The one "gotcha" that's easy to forget (and that causes compile errors when you do!) is the using statement that goes at the top of the .cshtml file and tells Razor where to find the implementation of the AmazonS3Storage class:

[Click here to download the Delay.Web.Helpers assembly, its complete source code, all automated tests, and the sample web site.]

Aside: Technically, the Delay.Web.Helpers.xml file is optional - its sole purpose is to provide enhanced IntelliSense (specifically: method and parameter descriptions) in tools like Visual Studio. If you don't care about that, feel free to omit this file!

To play around with the included sample web site, just open the folder Delay.Web.Helpers\SourceCode\SampleWebSite in WebMatrix or Visual Studio (as a web site) and run it.

Being able to repurpose code is a great thing! In this case, all it took to convert my existing BlobStoreApi into an ASP.NET Razor/MVC-friendly web helper was writing a few thin wrapper methods. With a foundation like that, all it takes is some testing to catch mistakes, a quick sample to show it all off, and all of a sudden you've got yourself the makings of a snazzy blog post - and a new web helper! :)