I used .NET 3.5 to write the first version of Insomnia about a year and a half ago. Its purpose in life is to make it easy for anyone to temporarily prevent their computer from going to sleep without having to futz with system-wide power options every time. Insomnia did its job well and people used it in ways I didn't expect: there were requests to allow the window to be minimized to the notification area, so I posted an update a few months later which allowed that. As a result, some people leave Insomnia running for extended periods of time (e.g., many days) and seemed likely to benefit from a version that didn't include the overhead of the .NET Framework, so I created new, native-code 32- and 64-bit versions of Insomnia late last year. These new versions did exactly what they were intended to and were also well received - but there's a catch...

Every couple of weeks or so, Insomnia gets featured by one of those "cool app of the day" sites (which is awesome, so thanks for that!). I never know when it's going to happen, but I can tell exactly when it does because I suddenly get a flurry of comments telling me the native-code versions don't run on Windows XP...

Aside: Many of you may be too young to remember; Windows XP is an operating system Microsoft released about ten years ago - practically an eternity in computing terms! And yet, a lot of people are still running XP...

Although I didn't set out to not support Windows XP, I also didn't make a specific effort to support it - and as the saying goes, "if you don't test it, it won't work". Well it didn't work, so I investigated and summarized my findings in a reply on my blog:

I've looked into the Windows XP (SP3) issue just now - the "ordinal 380" error is due to the fact that the LoadIconMetric API isn't supported on OSes prior to Windows Vista. It's easy enough to use the more general LoadIcon API and then native Insomnia starts successfully on XP - but it doesn't show any text. The missing text is because the LM_GETIDEALSIZE message isn't supported prior to Vista, either - and in this case the simpler LM_GETIDEALHEIGHT message isn't a direct substitute. What's more, the current icon doesn't seem to be recognized by XP, either (it shows the generic application icon in Explorer and nothing in the tray). Neither of these issues (text measurement and icon) are overly difficult to fix, but they're also not trivial and I'm not sure how worthwhile it is to spend time and effort to support native Insomnia on Windows XP when the .NET version is reported to work just fine...

That said, I'm open to input here. If a lot of people think this is useful, I'll look into doing the work - but if everyone's happy to use the .NET version on XP, I'm happy to let them.

For what it's worth, I don't recall anybody coming back with a compelling reason why XP support is necessary - but after getting another round of XP feedback recently, I decided it was something I should do simply because it comes up so often. Therefore, I'm happy to announce that Insomnia's native 32-bit and 64-bit versions now support Windows XP! 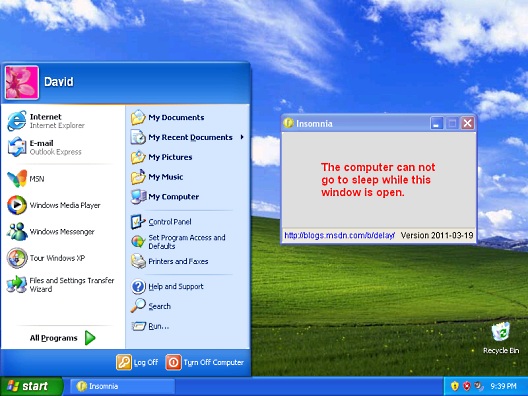 Note: With today's update (and in lieu of feedback to the contrary), the native versions of Insomnia are believed to run everywhere the .NET version does. Because there's no functional difference between the native- and managed-code implementations, I'll probably deprecate the .NET version soon. (Please don't get me wrong: I love the significant productivity benefits of using .NET! They're just moot here because I'm already doing the work to maintain the native implementations.)

[Click here to download the 32-bit, 64-bit, and .NET builds of Insomnia along with the complete source code for everything.]

I initially put off supporting XP because I figured very few people still used it. However, the steady stream of feedback from XP users finally convinced me there's enough interest to make the effort worthwhile. Windows 7 and Windows Vista users won't see functional differences with this release, but they will benefit from the slightly reduced footprint that comes from breaking the ties to COMCTL32.dll. My IdealSizeStatic control isn't a perfect replacement for the SysLink control, but it gets close enough - and does so without being overly complex.

Windows XP users: I hope you like the new support. Thanks for your patience!