No rest for the weary [Free tool and source code to temporarily prevent a computer from entering sleep mode - now available for .NET, 32-bit, and 64-bit!]

It was over a year ago that I wrote and shared the first version of my Insomnia utility. A few months later, I published a new version of Insomnia to satisfy the two most popular feature requests. Here's how I explained Insomnia's motivation at the time:

The default power settings for Windows are set up so a computer will go to sleep after 15 to 30 minutes of inactivity (i.e., no mouse or keyboard input). This is great because a computer that's not being used doesn't need to be running at full power. By letting an idle machine enter sleep mode, the user benefits from a significant reduction in electricity use, heat generation, component wear, etc.. And because sleep mode preserves the state of everything in memory, it's quick to enter, quick to exit, and doesn't affect the user's work-flow. All the same applications continue running, windows stay open and where they were, etc.. So sleep mode is a Good Thing and I'm a fan.

However, sometimes a computer is busy even though someone isn't actively using the mouse and keyboard; common examples include playing a movie, burning a DVD, streaming music, etc.. In these cases, you don't want the machine to go to sleep because you're using it - even though you're not actually using it! So most media players and disc burners tell Windows not to go to sleep while they're running. In fact, there's a dedicated API for exactly this purpose: the SetThreadExecutionState Win32 Function.

But what about those times when the computer is busy doing something and the relevant program doesn't suppress the default sleep behavior? For example, it might be downloading a large file, re-encoding a music collection, backing up the hard drive, or hashing the entire contents of the disk. You don't want the machine to go to sleep for now, but are otherwise happy with the default sleep behavior. Unfortunately, the easiest way I know of to temporarily suppress sleeping is to go to Control Panel, open the Power Options page, change the power plan settings, commit them - and then remember to undo everything once the task is finished. It's not hard; but it's kind of annoying...

I've gotten a bunch of positive feedback on Insomnia and heard from a lot of people who use it for exactly the kinds of things I expected. (Thanks, everyone!) But I've also heard from a number of people who use Insomnia for a slightly different purpose: as an override of their machine's current power settings. For one reason or another, these people don't have control over their power configuration (perhaps because their domain enforces the relevant group policy), but still want to prevent their computer from going to sleep. This is usually because they want to connect to their machine remotely (ex: via file sharing or Remote Desktop) and can't do that if the machine is forced to sleep... 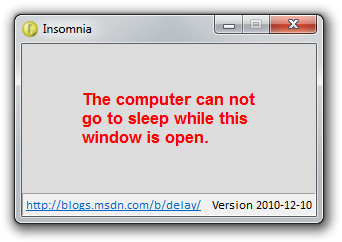 These people tend to put a shortcut to Insomnia in their Startup group (click Start Menu, All Programs, Startup) and set the "Minimize" flag to automatically run Insomnia as an icon in the notification area whenever they log in. Because they leave Insomnia running all the time, their computer stays awake and they're able to use it whenever they need to. I've always thought this is a cool scenario - and felt that maybe a lower-overhead version of Insomnia would be particularly compelling here.

I wrote the original Insomnia using the .NET Framework - which meant it was super-easy to write and took practically no time or effort on my part. That's the way (uh-huh, uh-huh!) I like it, because the thing I have the least of is spare time and so anything that makes me more productive is full of win. And in my experience, .NET isn't just more productive, it's dramatically more productive.

That said, everything has a cost, and one of the common downsides of .NET is longer startup time and higher memory use. All the stuff .NET does for you (comprehensive APIs, high-level abstractions, garbage collection, etc.) takes extra time to load and extra memory to keep around. That said, I'll confidently suggest these costs are negligible in the majority of cases and the benefits of .NET (developer productivity, rich feature set, security, etc.) are overwhelmingly in its favor. But Insomnia is a little different than most programs: the application exists only as a wrapper for a single API (SetThreadExecutionState), so the people who run it all the time aren't really benefitting from the power of .NET...

I thought it might be fun to re-implement Insomnia in native code (vs. managed code) since it was such a simple program. I've done exactly that - and the result is that Insomnia is now available in three versions: .NET, 32-bit native, and 64-bit native!

[Click here to download all three flavors of Insomnia along with the complete source code for managed and native.]

Of course, while it was neat to do some Windows API coding for a change, the experience served to reinforce my belief in the fundamental productivity benefits of .NET and the power of the WPF/Silverlight layout system. About half the code in native Insomnia exists for the purpose of layout - which the .NET version accomplishes much more succinctly with XAML. The other half of the code handles basic framework-y stuff like creating a window, configuring it, etc. - more things WPF handles for you or makes quite convenient. And the last half of the code [ ;) ] deals with a variety of little things that are quite simple in the managed world, but require non-trivial effort in native code (ex: copying strings, setting up a complicated function call, etc.).

Please don't get me wrong; I completely agree that native code has its place in life (and there's a certain feeling of power one gets from using it). But I've had enough of that for now and will be happy to return to .NET for my next project. :)