If you've done much work with Bindings in Silverlight, you're probably aware that Silverlight doesn't support applying Bindings using a Style's Setter the same way its big brother WPF does. This limitation isn't a big deal at first because people don't tend to need that until they're more familiar with the platform and have started using MVVM and taking advantage of the ItemContainerStyle property. But once you're working with scenarios where it's relevant, being able to specify Bindings in a Setter can be extremely useful because it replaces a bunch of code/subclassing with a single line of XAML! 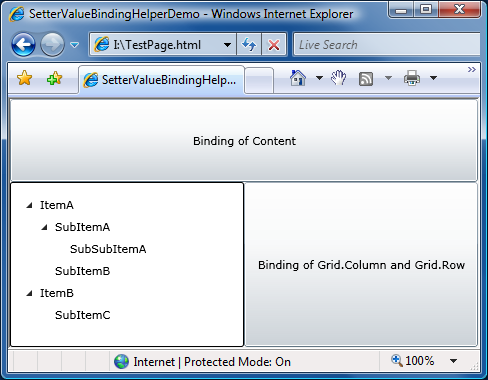 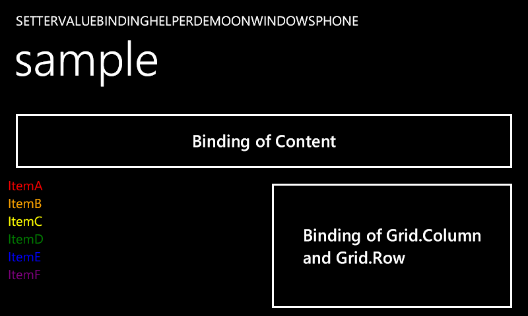 Other than converting the Silverlight sample's TreeView to a ListBox (because the former doesn't exist for Windows Phone), the sample works just the same on Windows Phone as on Silverlight. The code for SetterValueBindingHelper is nearly identical as well - the only difference being that the code to walk an application's assemblies for resolving attached property types can't be used because Windows Phone doesn't support the AssemblyPart.Load method. (But because this particular feature isn't used very often, its absence probably won't even be noticed.)

As a quick reminder, here's what a typical use looks like:

Aside: SetterValueBindingHelper supports more advanced scenarios, too - please refer to the previous post (or the original post) for information and examples.

[Click here to download the code for SetterValueBindingHelper along with sample applications for Silverlight 4 and Windows Phone 7.]

I've gotten a lot of great feedback from developers who have made use of SetterValueBindingHelper in their applications. I've found it quite helpful in my own projects, and I'm glad many of you have, too! With today's announcement, I hope another "generation" is able to use SetterValueBindingHelper to benefit from the many advantages of the Silverlight platform's rich data-binding support. :)