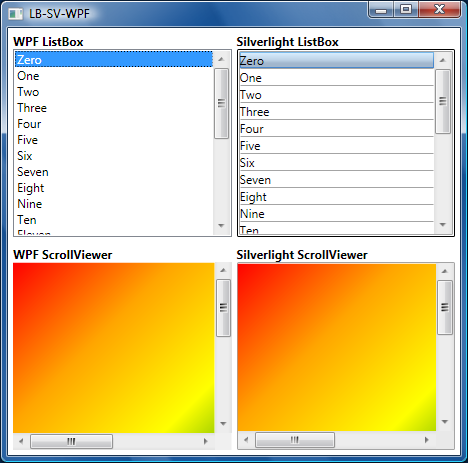 While there are some obvious style differences between the default look and feel of the two platforms, the control functionality is very similar. To prove it, I've attached a ZIP of the solution to this blog post so you can run the demo application on your own machine. [Aside: I did not say the behavior was identical, just very similar. :) ]

And though I didn't enable code coverage by default, those of you with the Visual Studio Code Coverage feature installed can easily turn it on by editing the LocalTestRun.testrunconfig settings. When compiled for WPF, ListBox and ScrollViewer live in the WPF namespace to avoid colliding with WPF's classes in System.Windows.Controls. So we can see below that the overall coverage for these controls is a smidge under 80% (the uncovered code is mostly involved with user interface manipulation (ex: mouse and key input) which I wasn't able to flush out because I ran out of time):

So if you were wondering whether it was possible to easily share code, XAML, and unit tests across both Silverlight and WPF, the answer is a definite YES! :)