"I never did mind about the little things..." [Free HideShowDesktopButtonOnTaskbar utility hides the "Show desktop" button on the Windows taskbar]

Over the holidays, a relative emailed me the following rant:

Most of my conversation with technical support was to find out how to turn off the "Show desktop" icon in the lower right corner of the screen. This icon can be engaged by clicking on it or hovering over it (if you select Peek). On a desktop or a laptop this is NO PROBLEM. But on a tablet, there is no difference between clicking and hovering so Peek is meaningless. VERY OFTEN when using and holding the slate/tablet the heel of my thumb ever so gently touches the "Show desktop" icon and I am taken to the desktop in the middle of what I am doing. As I work, I am in constant fear of touching this icon. I know that everything on my hard drive will not be erased if I do, but it is very annoying. I went on the internet and found a program that turns the icon off and it worked (so it can be done), but then my antivirus program said that it was a THREAT AND ADVISED ME TO PUT IT IN A VAULT WHERE IT COULD NOT HARM MY COMPUTER. I agreed and the program was deleted. I'm not the only one with this problem. The internet has many complaining about the "Show desktop" icon. MS allows me to turn the Clock and Volume icon off; why not the "Show Desktop" icon?????

If you want a somewhat more positive spin, "Aero Peek" and the "Show desktop" button are described in this article about new Windows 7 taskbar features. I don't use either myself, but a bit of internet searching confirmed some people really don't like these features.

The best way to disable a feature is to use an officially supported mechanism - and the good news is that disabling Aero Peek is easy to do by following the directions "To turn off desktop previews" near the bottom of this article. However, I was not able to find similar support for disabling the "Show desktop" button, so I resorted to looking for the next best thing: a group policy setting or documented registry key. Unfortunately, I struck out there, too. But I did find this snippet from a Channel 9 video where Gov Maharaj confirms there's no built-in way to disable the button.

Aside: The relevant discussion is interesting, so maybe have a look even if you're not opposed to the feature itself!

Well, if there's no official way to remove the "Show desktop" button and enough people want to do it, then it's time to start considering other solutions. According to the original rant (and the video discussion), there already are third-party utilities for this purpose - although they're not supported by Microsoft. But it sounds like at least one of these tools might be malware, so I'm not super enthusiastic about trying them out...

Fortunately, I have a rudimentary understanding of both Windows and programming [ ], so I wondered if the simplest, most obvious trick would work here. I coded it up one night while waiting for something to compile and was pleased to find that it worked! So I've gone ahead and prettied the code up and am sharing a simple utility to get rid of the Windows 7 taskbar's "Show desktop" button: 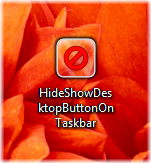 Of course, HideShowDesktopButtonOnTaskbar is just as unsupported and unofficial as the other utilities out there - so why choose it?

Okay, enough with the goofy sales pitch... how about some developer notes?

If you're bothered by Windows 7's "Show desktop" button and are looking for a solution, maybe HideShowDesktopButtonOnTaskbar is the answer. If you're curious how a hack like this works or are looking to dabble with replacing the CRT in your own programs, there might be something of interest here. Either way, HideShowDesktopButtonOnTaskbar was a fun side project - I hope you like it!