I've previously written about the benefits of localization and shown how to localize Windows Phone 7 applications. The techniques I describe in that post constitute a good workflow that's just as suitable for WPF and Silverlight desktop applications! But even with good processes in place, the way localization is done in the real world has some challenges...

You see, localization can be expensive: hiring people to translate an entire application, re-testing it in the newly supported locale, fixing resulting bugs, etc.. So teams often wait till near the end of the release cycle - after the UI has stabilized - to start localizing the application. This is a perfectly reasonable approach, but there are invariably a few surprises - usually some variation of "What do you mean that string is hard-coded in English and can't be translated??". It sure would be nice if teams could do some kind of low-cost localization in order to identify - and fix - oversights like this long before they turn into problems...

Yep - that process is known as pseudo-localization. What pseudo-localization does is create alternate versions of resource strings by using different characters that look similar enough to the original English characters that text is still readable - but obviously "localized". (This is one of those "a picture is worth a thousand words" moments, so please check out the Wikipedia article or bear with me for just a moment...) Additionally, because some languages tend to have longer phrases than English (German, I'm looking at you!), there's often an additional aspect of string lengthening to simulate that and help detect wrapping, clipping, and the like.

Aside: It's important to remember that the character "translations" are chosen exclusively on the basis of how similar they look to the original character and not on the basis of linguistic correctness, cultural influence, or anything like that!

Here's the sample application I created for this post running in its normal English mode. (It's not very sophisticated, but it's good enough for our purposes.) Can you tell if all the strings are properly localizable? Are there any other localization concerns here? 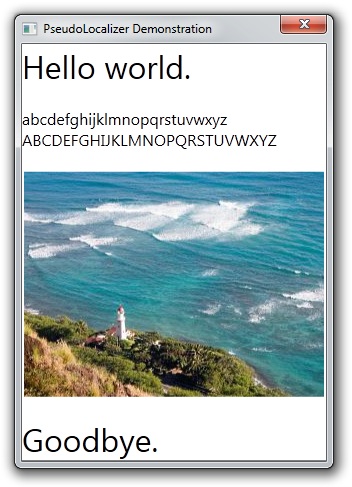 Pseudo-localization isn't a new concept and there are a variety of tools out there that do a fine job of it. However, none of the ones I found during a quick search appeared to be free, simple to use, and unencumbered by restrictions (i.e., licensing, distribution, etc.). So I thought it would be fun to write my own and share it with the community as open source under the very permissive Ms-PL license.

Aside: The recommended technique for localizing WPF applications is actually something else, but I have some issues with that approach and won't be discussing it here.

I've said it's easy to use PseudoLocalizer: all it takes are three special steps:

Done! Not only will all localizable strings be automatically pseudo-localized, but images will, too! How does one pseudo-localize an image?? Well, I considered a variety of techniques, but settled on simply inverting the colors to create a negative image. This has the nice benefit of keeping the image dimensions the same (which is sometimes important) as well as preserving any directional aspects it might have (i.e., an image of an arrow pointing left has the same meaning after being "localized").

Aside: I've never seen image pseudo-localization before, but it seems like the obvious next step. Although many images don't need to be localized (ex: a gradient background), some images have text in them or make assumptions that aren't true in all locales (ex: thumbs up means "good"). So it seems pretty handy to know which images aren't localizable!

Okay, let's see how well you did on the localization quiz! Here's the sample application with PseudoLocalizer enabled: 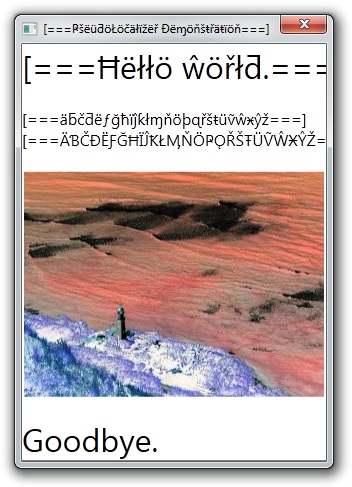 Hum... While it's clear most of the text was correctly localizable (and therefore automatically pseudo-localized), it appears the lazy developer (uh, wait, that's me...) forgot to put one of the strings in the RESX file: "Goodbye" is hardcoded to English in the XAML. Fortunately, the image is localizable, so it can be changed if necessary. Unfortunately, the fixed-width application window seems to be a little too narrow for longer translations (like German) and is clipping two of the pseudo-localized strings! Nuts, I'm afraid this application may need a bit more work before we can feel good about our ability to ship versions for other languages...

[Click here to download the complete source code the PseudoLocalizer and the WPF sample application shown above.]

Because the cost of fixing defects increases (dramatically) as a product gets closer to shipping, it's important to find and fix issues as early as possible. Localization can be a tricky thing to get all the kinks worked out of, so it's helpful to have good tools around to ensure a team is following good practices. With its low cost, simple implementation and friction-free usage model, I'm hopeful PseudoLocalizer will become another good tool to help people localize successfully!